Looking for a warm weather athletics camp? We provide everything needed for perfect track and field training in one of the best places in the world!
;

Modern sports facilities for athletics camp, equipped with everything necessary for training of professional athletes and amateurs. The unique location of the stadium in the valley with its own micro-climate, ensures comfortable weather conditions throughout the year. 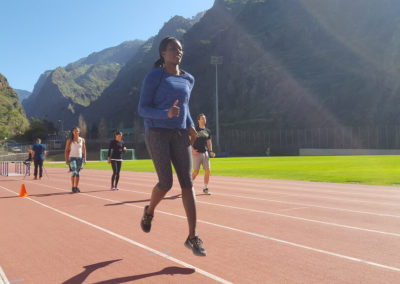 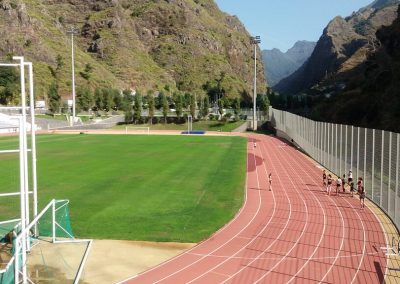 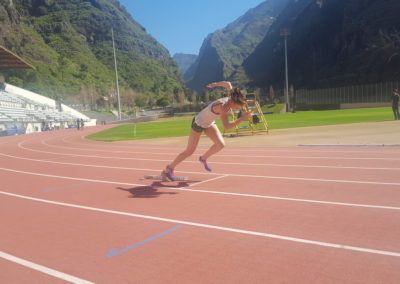 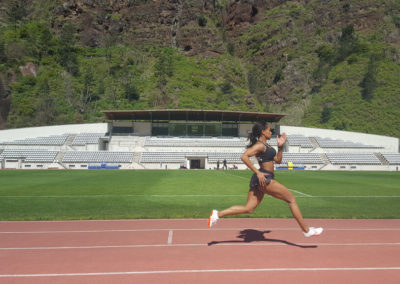 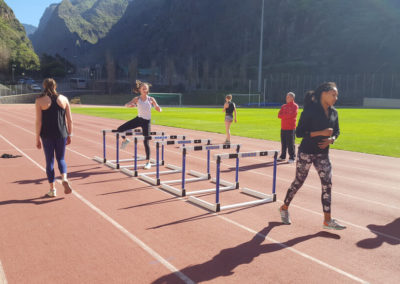 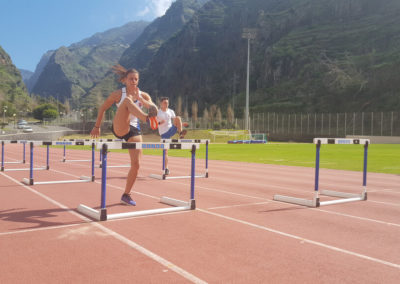 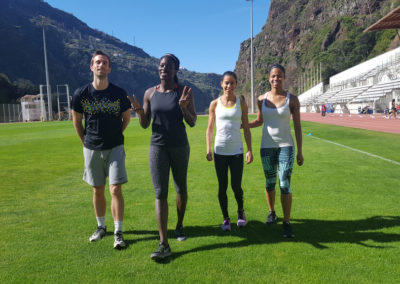 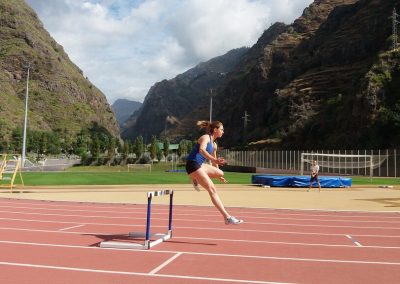 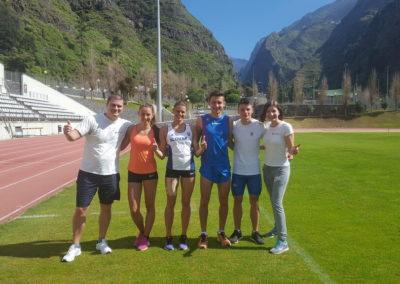 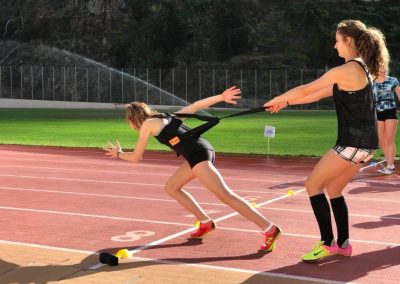 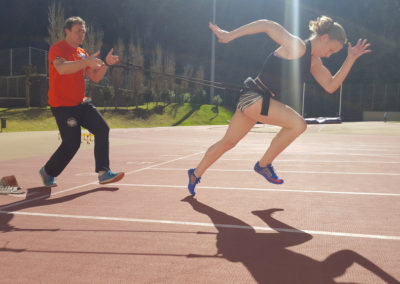 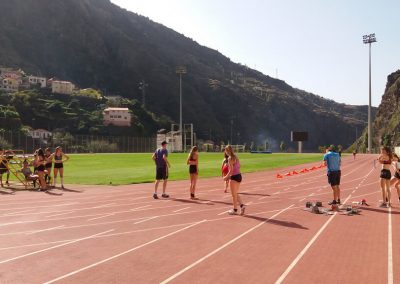 The training facilities are located approximately 5 – 10 minutes drive from the hotel area but we will include all transfers to and from the sports complex. We can offer a number of hotel options ranging from 3* to 5*. Please ask us for more details!

Individualized training sessions with one of our certified coaches

History of Athletics in Madeira

Athletics is one of the oldest sports in the world. The beginning of the sport dates back to the first Olympic Games in 776 BC.

In Madeira, the first record of the sport is related to the so-called Jogos Olímpicos Madeirenses (Madeiran Olympic Games) in 1913. This was the organized sports competition on the island. The competition took place in a dirt track situated where the Barreiros Stadium is today. It was an amateur event organized on the weekends.

Only in 1925 with the creation of the Liga Madeirense dos Sports Atléticos (Madeira League of Athletic Sports) did the sport begin to have a more regular activity. Clube Sport Marítimo, Clube Desportivo Nacional, and União Futebol Clube all participated in this league with a total of 42 athletes.

In 1958 the Volta à Cidade do Funchal (Tour of the City of Funchal) was created. It was to quickly become one of the most popular events of Athletics in Madeira. The Volta à Cidade do Funchal is a 6 km race held every year on December 28. The event popularity has grown beyond the Island and is increasingly more sought after by internationally renowned athletes such as José Rocha, Mats Lunders, Moses Kibet, Yemane Tsegay or António Abadía. The race enjoys large support from the local population who participate in the run every year. In 2017 more than 3500 runners participated in this competition. This is the oldest road race in Portugal and one of the oldest in Europe.
In 1962, the Federação Portuguesa de Atletismo (Portuguese Athletics Federation) created the Centro Regional de Atletismo in Madeira (Regional Athletics Center) where 98 athletes from several clubs were enrolled. With the regular practice of the modality taking place in the Barreiros stadium, the conditions were improved and in 1970 the first training course of athletics judges was created.

Athletics in Madeira has had a big improvement in this decade: Lomelino Freitas and Maurilio Silva were the first Madeiran people to participate in the National Youth Championships, Maurílio Silva of the Clube Sport Marítimo made its first international appearance and Clube Sport Marítimo won the collectives of the III Division in 1977.

In 1997, the Associação de Atletismo da Região Autónoma da Madeira (AARAM) was created. This athletics association is now responsible for managing the future of the sport in the region. The organization manages most of the athletics events in the island: Volta à Cidade do Funchal (Tour of the city of Funchal), Meeting Internacional da Madeira, Meia Maratona do Porto Santo (Porto Santo Half Marathon) and Campeonato Europeu de Corrida de Montanha (European Championship of Mountain Run) among others.

The development of the modality in Madeira is connected to the Barreiros Stadium. The construction of a synthetic athletic track inside in Barreiros was a big contribution to the development of the sport. In 2009, the Clube Sport Marítimo decided to expand the football complex in Barreiros and the running tracks were removed. At this moment there is only one homologated athletics track for national and international competitions in Madeira: the Complexo Desportivo da Ribeira Brava (Sports Complex of Ribeira Brava). The complex is equipped with 8 lanes of 400m and all the necessary equipment for the practice of the modality. Thanks to its location in the Ribeira Brava valley, it has a unique micro-climate that makes it perfect for competition all year long.

There are 2 more places in the region where it is possible to practice athletics: in Câmara de Lobos stadium and Machico stadium. Both stadiums have tracks that are suitable for athletics training, however, these tracks are not homologated for any official competition. The regional government aims to obtain homologation of the tracks, although dates have not been predicted.
Recently, the local government approved the creation of a track for technical disciplines in Penteada, for which construction should finish before the end of 2019.

The Future of the Athletics in Madeira

The development of the infrastructures and the increasing interest of the population in the modality made athletics sports grow in the region. Every year Madeira forms more athletes that stand out at a national and international level. Athletes such as Alberto Paulo (Olympic athlete), Maribel Gonçalves (Olympic athlete), Dany Gonçalves and Tiago Silva are just a few examples of Madeiran athletes that performed well in national and international events. At this time, the region’s annual athletics calendar includes more than 100 events.

Athletics in Madeira still has a long way to go, but it has great potential and looks secured by the growth of athletes and association interested in the modality.

Madeira Sports Centre is located in Meia Légua, Ribeira Brava, and expands to 50 000 square metres that allows to host a lot of athletes at same time. Today it is the most modern and well-equipped sports centre on whole Madeira Island. Thanks to the implementation of the newest constructing techniques as well as installation of the top quality equipment, it brings a great comfort for the sportsmen training here.

Furthermore, from the one side there is a tribune with 2 300 seats, and the opposite grabs attention with a beautiful waterfall. Madeira sports centre is remarkable for its recreational places, cycle track, two children amusement parks, and boardwalk with small restaurant snack bar. The location in the valley between two mountains generates awesome background.

To calculate the cost of athletics camp, please specify the package you choose, indicate type of sport, the number of athletes, coaches, accompanying persons, desired dates and duration of planned stay, add your special requests and/or questions.