Discover Madeira through one of the most unique and exhilarating sports. Surround yourself with nature of five continents, all gathered together in one place. Hundreds of unique routes awaiting to be conquered! Your trail running camp will be unforgettable!

1 WEEK CAMP1 DAY RUN
Trail running is a running mode performed on uneven terrain, track, uphill, downhill and dirt road. Its degree of difficulty is much greater than that of traditional races. However, any healthy person can practice this off-road racing as long as he respects the stages of progressive increase of volume (distance and time) and intensity (speed). At trail running, people find solidarity, fellowship, ecological awareness and a lot of respect among athletes. The trail runner is driven through mountains or side paths, following the signage, and feels the pleasure of the surprise of every climate change, enjoys the transformations of the route and appreciates the beauty of the fabulous landscapes that never repeat themselves.
Trail Running Packages 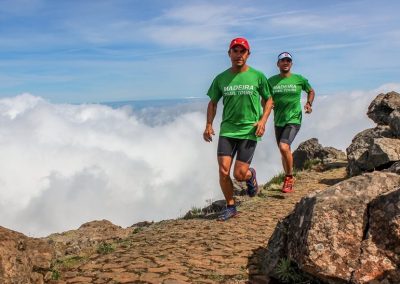 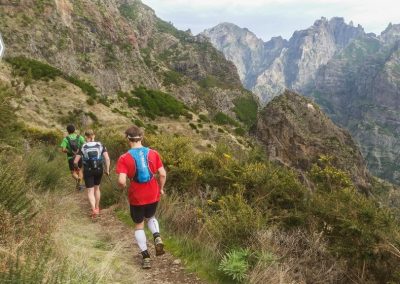 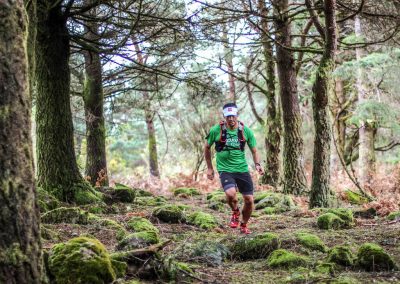 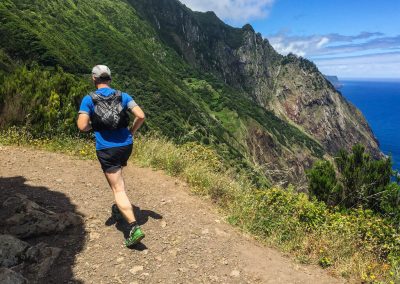 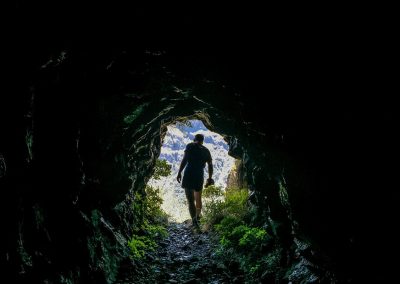 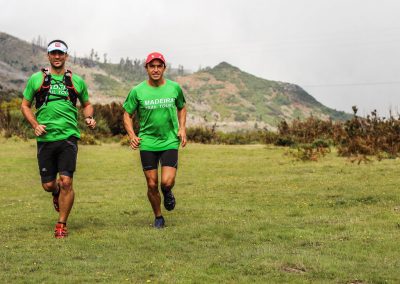 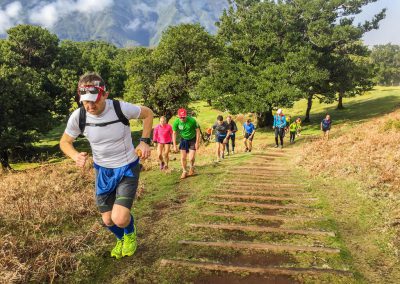 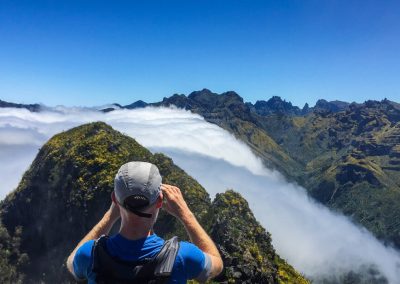 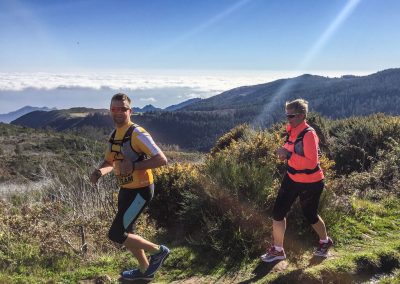 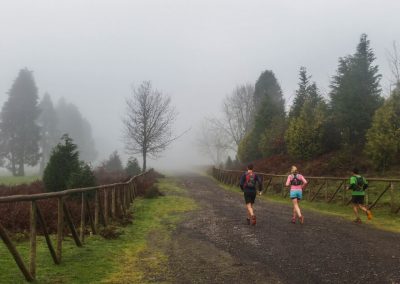 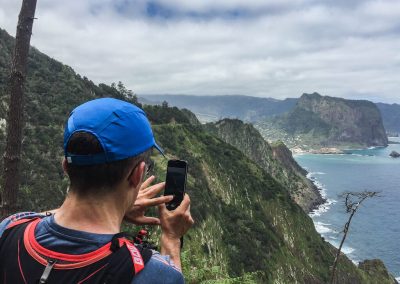 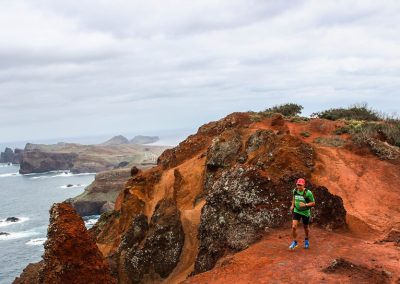 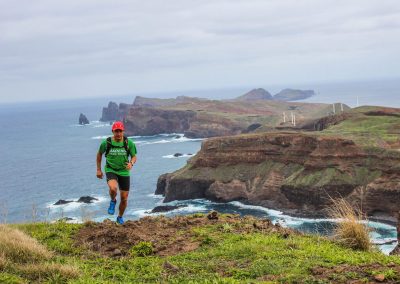 A bit of history of trail running in Madeira

The island of Madeira, thanks to its relief, climate and forest, is an authentic paradise for the practice of trail running, a sport that combines the pleasure of running to the exploration of nature. The levadas, which are much sought after by tourists who visit Madeira, are great tracks to run in the island’s beautiful Laurisilva forest. However, as they are generally flat, it is necessary to abandon the most common tracks to discover technical descents, continuous climbs, stairs, different types of floors and a whole range of excellent terrain and courses for training and trail running competitions all over the island. In fact, the permanent coexistence between the ocean and the mountain makes the Madeira trails the most beautiful trails in the world.

Since 2004 a group of members of the Mountain Club of Funchal had the habit of making an annual crossing of the island in less than 24 hours. This group was made up of Paulo Perdigão, Noel Perdigão, Nuno Gonçalves, Vítor Sousa, Marcelo Gaspar, Honório Teixeira, Sérgio Perdigão and Sidónio Freitas, who would give rise to the MIUT® – Madeira Island Ultra Trail event. However, the sports activity known as trail running only began in 2008, with the organization of the first event in the Autonomous Region of Madeira.

In the first edition, in 2008, 141 adventurers faced the challenge of connecting the Ponta do Pargo lighthouse to the city of Machico and, the following year, the place of departure has fallen on Porto Moniz, with 82 participants. However, in 2011, due to the violent fires that had devastated the region in August 2010, when this initiative was not carried out, the format of the course was designed in a circular way, starting and arriving in Porto Moniz, counting with the presence of 128 participants. In 2012, with 303 participants, the crossing was recovered, with an inversion of the direction of the course, that is, departure from Machico and finish in Porto Moniz.

From 2013 onwards, the organizers chose definitely the current course of the event, starting from Porto Moniz and finishing in Machico. The edition of 2013, with 449 participants, also marked the entrance of the race in the National Circuit of Ultra Trail, being also Championship of Portugal of Ultra Trail, thus clearing the national champions to the Championship of the World of Ultra Trail, statute that would come to be repeated in 2015.

In 2014, the event grew again in the number of participants, reaching the 749. The 7th edition (2015) reached the record number of 1,329 participants, from 36 nationalities, and raised the sports event, integrating the restricted circuit of the UTWT – Ultra Trail World Tour, with the status of future race. In 2016, already as an integral part of the UTWT circuit, the event reached a new record of 2,041 participants from 41 countries. Following what has happened in recent years, MIUT® has continued to grow in participation, reaching a record of 2,490 participants from 45 nationalities.

On the island of Madeira there are two major events of trail running: internationally, the Madeira Island Ultra Trail (crossing the island from Porto Moniz to Machico); at national level, the Porto da Cruz Natura Trail, which started to integrate, from 2016, the National Circuits organized by ATRP (Trail Running Portugal Association).

The trail running achieved since 2012 such a scale in Madeira that, day by day, there are more athletes training and the number of entries in the sporting competitions throughout the year has come up to confirm that this mode is the most practiced in this region. Madeira has the first training course authorized and duly marked throughout the country. The training course of Porto da Cruz, in the north of Madeira, is maintained by the Local Parish Council and offers athletes 3 distances: 9 km , 19 km or 35 km. The three routes are well signposted and are designed in a circular way (beginning and end of the route in the Vila do Porto da Cruz).

Currently, there are about 400 runners, mostly male athletes, who regularly attend the various events organized throughout the year, however, there has been an increase in the number of athletes who prepare and participate in the longest races (Ultra Trail). In 2016, Madeira had three athletes recognized by the IPDJ – Portuguese Institute of Sports and Youth – as High-Performance Athletes in the modalities of trail running , namely Leonardo Diogo, Luís Fernandes and Manuel Faria.

Luís Fernandes, a native of the parish of Jardim da Serra, started on trail running in 2012, achieving from the first competition excellent results. He has numerous victories and relevant results even at international level, but the great highlight goes to his victory in the Madeira Island Ultra Trail of 2015, being the first athlete from Madeira to win this race, which is the biggest competition of trail running in Portugal.

Leonardo Diogo is a native of Ribeira Brava and appears on the trail running at the beginning of the development of this sport in the region and in the country. He is the athlete with more international events and a name already known worldwide. He is one of the references of the regional trail running, with its good disposition and magnificent ability to always run among the first.

Manuel Faria has always been linked to athletics and Jardim da Serra and is a famous name of Madeira’s Running Trail. With a calm and rational attitude, he is a candidate for the victory of any event in which he participates, attending national and international competitions.

However, nowadays, female athletes also stand out in the Madeira Running Trail: Luísa Viveiros, who has already won important competitions and has achieved good results in the international competitions in the region; Olívia Sousa, who was called to the National Team; Lúcia Franco, who since 2015 has been the great dominator of the regional Running Trail ; Cristina Nascimento, who since 2014 has been a regular presence on the podiums of all mountain events on the island of Madeira.

The Funchal Mountain Club will host the 10th edition of MIUT® – Madeira Island Ultra Trail, an event held in Madeira Island from April 25 to 29, 2018, consisting of four events: MIUT, Ultra, Marathon and Mini, all of them in linear format. The routes of the 4 MIUT® races cross areas belonging to the municipalities of Porto Moniz, Calheta, Ponta do Sol, Ribeira Brava, São Vicente, Santana, Câmara de Lobos, Funchal, Santa Cruz and Machico.

For lovers of trail running, it is possible to discover the island in running mode, as they have at their disposal many routes in different municipalities of Madeira island: trails in Calheta, Câmara de Lobos, Funchal, Machico, Ribeira Brava, Santa Cruz, Santana, São Vicente, Ponta do Sol, Porto Moniz, Porto Santo.

Trails in Câmara de Lobos and Curral das Freiras are the place that makes lovers of trail running remember the MIUT (Madeira Island Ultra Trail). This parish, totally surrounded by the highest mountains of the Island, is the ideal challenge for those who love climbs in high mountain. The accesses between the Curral das Freiras and Jardim da Serra are particularly sought after for very hard workouts, either in slope and altitude differences, and there are two main accesses: from Boca dos Namorados and Boca da Corrida.

Another famous trail running event is Ultra SkyMarathon® Madeira, organized by Madeira SkyEvents in partnership with Clube Desportivo Escola Santana and, Federação de Campismo e Montanhismo de Portugal, offers the participants this experience with an event in the heart of the Laurisilva forest and with absolutely breathtaking panoramic landscapes.

On the Trails in Santana, you will find the highest peak in Madeira, the famous Pico Ruivo. This zone presents a diversity of trails that offer the most demanding climbs and descents, but also the best landscapes that the island of Madeira has to discover.

The inhabitants of the island and tourists are increasingly delighted with the potential of the island of Madeira for the practice of this sport, which is inserted in the so-called active tourism and that privileges the contact with nature and the healthy living among participants, being so important the fun like the competition itself. With stunning natural beauty as a backdrop, practitioners view the trail running not only as a race, but as a state of mind, a symbiosis between themselves and the nature that surrounds them and sets their souls free.

To calculate the cost, please indicate the number of participants, desired dates and duration of planned stay, add your special requests and/or questions.